I have to admit something that I am rather ashamed of. I have heretofore been ignorant of Caribbean cuisine except that from the island of Jamaica. Being lucky enough to have a father hailing from said island means I have been blessed with the gift of traditional  Jamaican food along with what I like to call a Jamaican/ British fusion (being my moms wonderfully interesting interpretation of the cuisine).

My dads cooking style is very traditional and not very experimental, home cooked food passed down through generations is at the heart of his cooking.  Just the other week he asked my mom and I how to roast a chicken and what to accompany it with. Something that astounded me coming from a 60 year old man who is a wholly competent cook and has resided in this country for over 40 years, surely cooking a roast comes with the British package. I guess he has always had my mom for that.

The Islands of the Caribbean are actually very diverse. They each have their own varying culture, cuisine, music and are even seperated by different languages, which explains our previous lack of Caribbean cuisine creativity (excepting my mothers mixed bag that is our family personified in food). Each island is distinct from the other yet can be linked by certain factors, the cricket team being a perfect example of this.

The inspiration for this dish stems from a lazy day off at my mothers house with nothing to do aother than flirt with the different T.V channels searching for a companion for the afternoon (somewhat a novelty for me due to the lack of such a device at home). Flicking through channels I naturally landed on the Food Network with Jonathan Phangs camp take on Trinidadian cuisine.

It opened my eyes to a cuisine I had never previously considered, with ingredients that are familiar friends (thyme, coconut milk, scotch bonnet) but with a refreshingly different approach.The Chicken Pelau caught my eye due to its delightful simplicity as a one pot wonder, using ingredients that I mostly already own, keeping my purse at a weight I could handle at this time of the month.

To start me off on this culinary adventure of tasty proportions, the back bone of my Pelau (and so it seems to many a Trinidadian dish) is the somewhat refreshing,  green seasoning. This is something so versatile it can be used in anything you fancy, from soups to stews and one pots for that extra depth of flavour (this is through personal experience having already used it a fair few times).

I have found a magical formula for making this now indisposable seasoning paste (as no two recipes for it are the same).  This can be used as a rule and adjusted to your tastes.

It is worth noting, the onions tended to be of the spring variety in many a recipe I happened upon. I choose to go one further and use a mixture of onion and spring onion for extra oniony freshness. The green herb section can be made up of as many as you choose, the very nice lady Mr Phang visited used sage and tarragon as well as thyme. I would say thyme is a must as it is an essential ingredient to many a Caribbean dish- it would be rude not to! I added coriander leaf alongside this for its fresh, cooling citrussy notes and due to previous existence in my fridge,  quite frankly I do not have the money to be throwing around indulging in a catalogue of herbs that are not readily available in my house, convenience anyone! Note to self, must plant herb garden!!

The extra ingredients are, but not limited to,  hot chilli pepper (Scotch Bonnet being the chilli pepper I choose due to its prevalence in Caribbean cooking and distinguishable flavour) and celery (used to lend to the seasoning a lovely peppery dimension). Many recipes include the addition of a sweet pepper (Pimento pepper being the usual suspect) to the seasoning as an extra ingredient. I left this out a) because I have no idea where to lay my hands on the elusive pimento pepper (it was nowhere to be found in my locals) and b) because I was feeling too stingy to buy any of the sweet peppers ASDA had to offer, roll on payday for unrestrained pepper purchases!! Pumpkin also seemed to rear its orange head in many a recipe, but not being the season I didn’t bother to open that can of worms.

The end result was something fresh and green that gave the dish that extra somethin’ somethin’. My own recipe is just a guideline, it really is just down to your own taste. I may tweak and change it for my next batch  and for research purposes but this one worked a treat.

A handful of coriander leaves (chopped)

Blitz in food processor till nice and pasty. 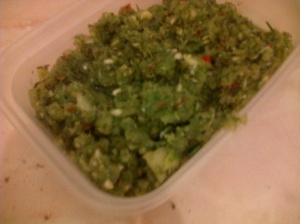 Out of focus picture courtesy of Blackberry

This can be refrigerated for about a week (or until it looks fousty), or frozen, I try to freeze in portions so as to not have to take an ice pick to break off individual chunks.

On to the Pelau. This was inspired by Mr Phangs recipe with a few tweaks, he uses curry powder, whereas I choose not to, as from what I can gather it is not traditionally included in the dish.

Hot pepper sauce can be found in the Caribbean section of your local Tesco, Sainsbury’s or shop self respecting enough to include this wonderful ingredient. I keep it in my cupboard to add a subtle or not so subtle kick to any dish, including cheese on toast. Nom Nom! 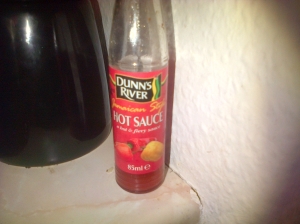 Scotch bonnets are also widely available and are very hot! When selecting remember that the red peppers are the hottest with the greens the least fiery (I don’t know if this is really obvious but it wasn’t to me)! Caution to be advised when handling these beasts as with all chilies.  I had really tingly, oddly burning skin post hand washing after using these. Need to wash thoroughly. And then do it again! Keep away from eyes!

Hot pepper sauce (about 1 tsp or to taste)

A good bit of ginger

Can of gungo peas (or kidney beans if you so wish) 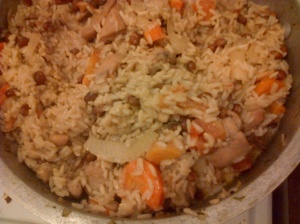 The result is fresh and wonderful. One pot dinners are a weekday winner, when work has whittled away the will to wash up.

Watch Fire in Babylon for an excellent insight into the West Indies cricket team!!

Another school classic! My food over the last week or so has been the closest I will get to a time machine, transporting me back to those innocent years prior to adulthood corruption . This was the crowning glory of school dinners, served with pink, strawberry flavoured custard, chocolate crunch was the treat that defined those treasured formative years.

Understandably, I underwent feelings of pity, shock and dismay when I found that my manfriend  had never heard of the stuff! Scandalous! Being 3 years younger than myself I thought that perhaps this was one of the things that Jamie got rid of in his butchering of the typical canteen style school dinner. Upon further investigation (in the form of words had with colleagues, friends and family about said subject), I found this to be an invalid conclusion. Those of a similar age to my partner had also experienced chocolate crunch at school with its famous pink partner in crime, some even mention a green peppermint custard companion, something I was never bestowed with.

This led me to thinking. Is chocolate crunch a regional phenomenon? Is it just a Brummie thing? With my manfreind being from Nottingham, further probing of friends from outside of Birmingham found that they had also never heard of it. This explanation was beginning to seem more and more likely. Eventually, further investigation exposed this as an untruth (a friend from the same side of Birmingham had also never heard of it).

This travesty in the form of the depravation of one of childhoods most treasured puds could only be fixed through an accurate dedication to chocolate crunch replication.  I was too lazy to make my own custard so the plain (non pink) tinned stuff would have to do.

In all honesty my friends deprivation was a mere excuse for rustling this up. The truth of the matter is, I wanted something easy and chocolatey that could be whipped up in the time it took for my dinner to go down, this literally takes 30mins from start to finish!

A four ingredient wonder, that is too easy to be true. For those who have never tried it, is not unlike an amalgamation of a cake and a biscuit. I assume granulated sugar should always be used to boost the crunchy texture.

Best eaten warm with custard, but can also enjoyed as a cold crunchy snack!

Preheat oven to 180.  Line tin with baking parchment (I used 20cm square tin). Mix flour, sugar, cocoa. Finger mix (scrunch) until crumbly. Pour mixture into tin. Pack it down until compact (as with shortbread I like to punch it down because its fun). Cook for 20 mins. Once removed sprinkle with a little granulated sugar. 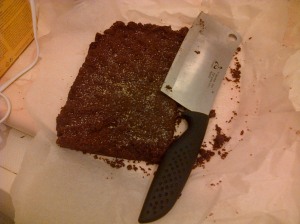 Please note, this is more crunchy when cold, if you like it softer eat straight from the oven!!!